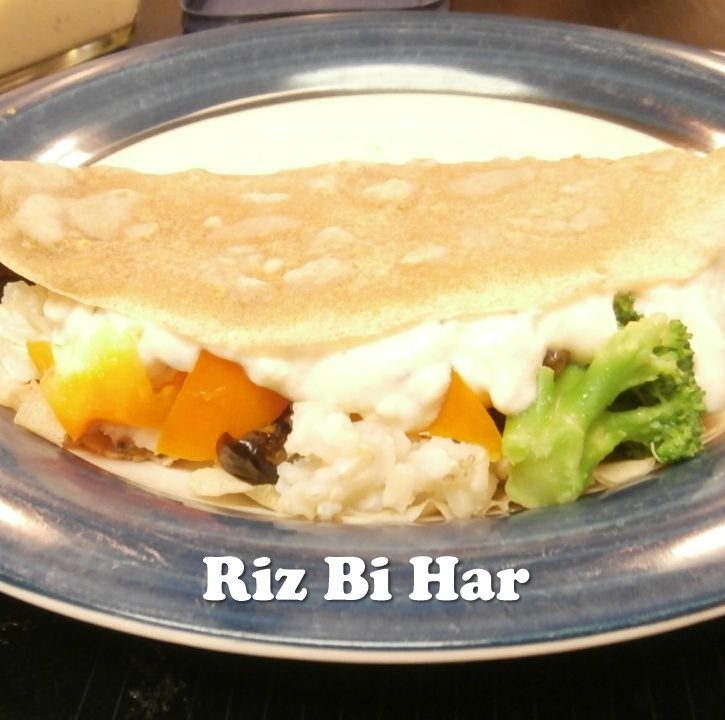 To cube an eggplant, cut off the stem end, then cut it in half to make a flat surface. Then cut parallel lines the long way, half an inch apart. Turn the cut strips of eggplant on their sides, flat side down, and cut the long way again, so that you have long thin pieces of eggplant. Then cut crosswise to get cubes.

Once upon a time, there was a local Ann Arbor restaurant called Sharayar. Whenever I ate there, I always ordered a dish called Riz Bi Har. They had lots of other good food on the menu too, but I really especially adored the Riz Bi Har, so I started to order it every time I went there.

The restaurant Sharayar was a favorite for many years of happy eating. It was a sad day when they closed.

After years without Riz Bi Har, I decided to undertake making my own. I started by asking people on the Ann Arbor Parenting e-mail list, Arborparents, if they remembered the Riz Bi Har from Sharayar, and what they thought was in it. This is the same tray of eggplant after cooking. The volume decreases a lot as it cooks.

So, I set out to make that.  My experiments led to something really good, even on the first try. But over time this dish has evolved into something less like Sharayar’s version and more truly my own.

The magic in this is the combination of eggplant with a creamy, tangy, garlicky, vegan Tzatziki sauce. All of the other ingredients in this recipe can be swapped around and the results will still taste good. As a variation, you can serve it in a bowl Here is a filled tortilla, ready for folding or rolling. This one is really full, so I folded it in half rather than trying to roll it up.

instead of wrapped in a tortilla. You can swap around which vegetables you choose. If you are not a fan of eggplant, you can swap it out and replace it with some additional grilled or roasted veggies instead.

I am so glad that I tried making my own Riz Bi Har. If it was gone forever I would have missed it — it is very yummy and one of my favorite recipes. Folded, the yummy stuff inside gets covered up, which is harder to photograph. But it is still yummy. :) 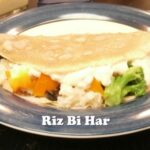