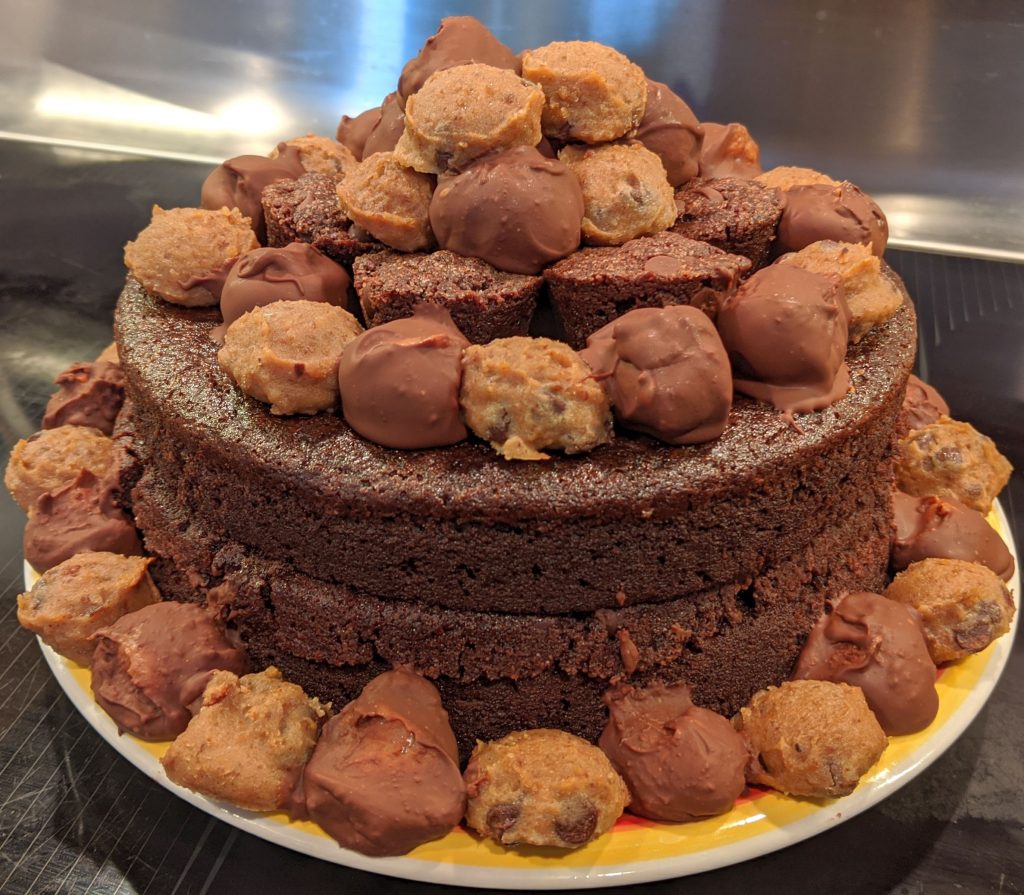 21 is a big birthday, so I decided to make a really amazing cake. But I also wanted to make a cake with no frosting. So I loaded up the cake with brownies, truffles, and ball-shaped chocolate chip cookies. Yum!

Every part of the cake is gluten-free and dairy-free. Most of the parts are vegan, too.

What I did was:

1) I made a two layer cake using my favorite gluten-free vegan chocolate cake recipe, and baked it in a matching pair of 9-inch silicone pans.

2) I mixed up batter for my favorite brownie recipe. I baked half of it in a 9-inch silicone pan that was the same kind that I had used for baking the cake layers, and I baked the other half of the batter in about eight holes of a silicone mini-muffin pan. Both parts took about 20 minutes to bake. I started by baking them for fifteen minutes, but when I checked the temperature with a digital thermometer, it needed to cook longer to firm up. For baked goods to be solid and not squishy, I’ve found that usually you want the temperature to be somewhere around 190 degrees Fahrenheit, on up to 200 degrees. I checked the cake this way too, and baked one layer for a few more minutes until it reached this temperature range too. 3) I made a batch of chocolate chip cookies from my favorite recipe, using a variation of that recipe where I used cooked red lentils to replace some of the nuts. (Someday I will post the red lentil version of that recipe!) To bake it, I used a small cookie scoop to make little balls of cookie dough on a silicone nonstick sheet on top of a cookie sheet, and then I baked them for 10 minutes.

4) I made chocolate truffles from a really amazing vegan recipe that I have not yet posted (but I will someday!).

When everything was baked, I stacked one layer of the cake upside down on a pretty plate. Then I un-molded the brownie layer on top of that. When I un-molded it, it broke into a few pieces, but it was very malleable, so I just pushed the pieces back into place as if it was frosting between the two layers of the cake. I figure that nobody would see the brownie layer anyway, so having a repaired break in it is fine.

Next, I un-molded the second cake layer and placed it right-side up on top of the brownie layer. The thin top part of this cake layer stuck to a plate that I used for unmolding it, but I figured that this too won’t matter, since lots of goodies would be stacked on top of it, so the actual top of this layer isn’t visible.

Next I placed a circle of brownie mini-muffins in the middle of the top of the cake. Then I alternated cookie-balls and truffles — placing the truffles while the chocolate was still wet — in circles on top of everything. The wet chocolate from the truffles helped to attach them to the cake.